“If I’m Really Being Honest…”

Is telling the cold, hard truth always the best thing to do?

According to Paul Ekeman, there are nine basic reasons why people lie. Some are more common than others. As this graphic shows, the size of each “excuse circle” corresponds with the probability that someone will use it for that purpose.

So “getting a reward” is the smallest reason people lie, while “avoiding punishment” carries the largest probability of why people would not tell the truth in a given situation. 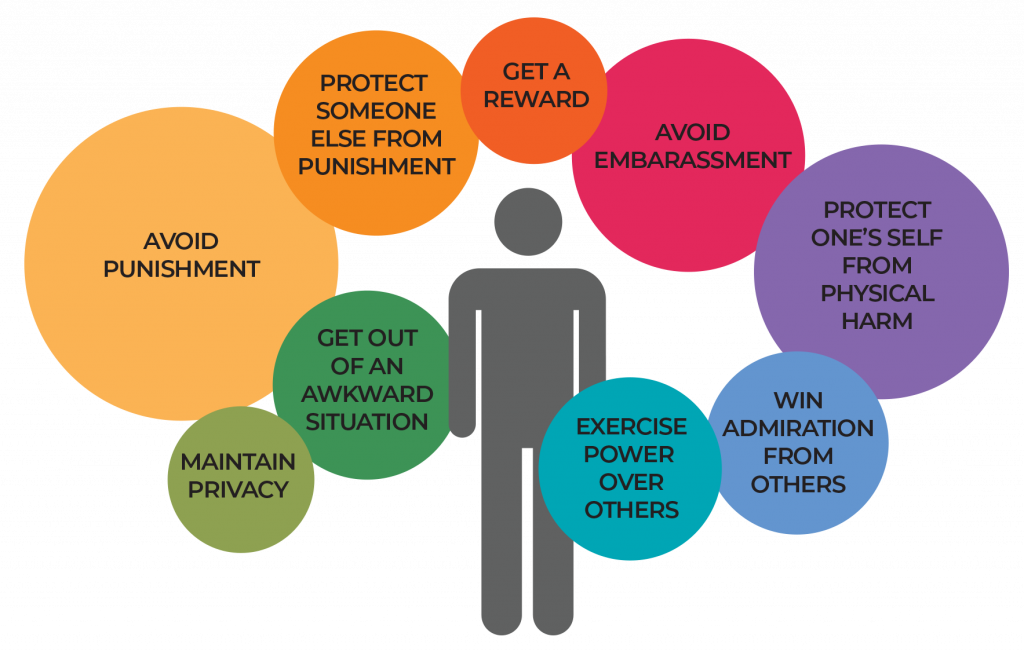 My estimable professor, Vernon Merrifield, often said, “It’s kinder to be honest”. Indeed, if he had not been honest with me as a junior graphic design student, I wouldn’t have made it into this business. I wasn’t “making the right mistakes” as he put it. So I learned to hear the criticism in a way that made it helpful.

I’ve tried to take that to heart with new students I’ve encountered and I’ve often been labeled as a “Simon Cowell” by colleagues when trashing a student’s under-developed portfolio, because I wanted to take the hard road and rip off the band-aid all at once. Some saw it as trashing, some saw it as constructive. But hear this: it’s much easier for a student to hear “that sucks” from someone who really wants to help than to let them dance merrily into a cutthroat marketplace full of piss and vinegar and a weak portfolio. The greater cruelty is to let them go with a pat on the back and a tepid “nice work, kid. Good luck” and let them walk into the sacrificial corporate arena.

So do we treat our clients with the same honesty and respect?

The customer is always right. Except when they’re not.

The mantra “the customer is always right” can be problematic. Sometimes a client will formulate a “great idea” that doesn’t exactly align with strategy. At that point the agency has a choice. They can drink the kool-aid. Adopt the mantra. Say “yessir, great idea” ; “Wish I’d thought of that”; “genius”. Like Pappy O’Daniels’ cronies. It’s the safe way in the short term—the path of least resistance.

No, it’s always better (and kinder) to be honest. When you know better, to let your client barrel full-steam ahead with your blessing is not going to turn out well.

1) Speak up in the beginning, before it’s too late. Your very first meeting is really important, because this is where you establish your boundaries, where you get to know each other. If you encounter an issue you disagree with, just say, “Respectfully, that may not a be your best play here, and here’s why”. After all, they’re hiring you for more than your winning personality. They will appreciate your opinion 99 percent of the time, if you speak up about any doubts during the first real contact with them. If you don’t you may lose the opportunity to be taken seriously down the road.

This is not to say a client is unable to have great ideas. After all, they’re much closer to their product or service than the agency, and it’s their neck on the line. But that mindset can be a blessing or a curse, depending on their ability to separate themselves from reality and look at their problems objectively. Our clients often have amazing ideas. And you need to weigh the pros and cons honestly as you can. But if you recognize a bad idea, you owe it to them to be honest.

Legend has it that the great ad legend Bill Bernbach carried a card that had only four words: “What if they’re right?”. He would often leave it on his staff’s desks after a particularly raucous meeting. 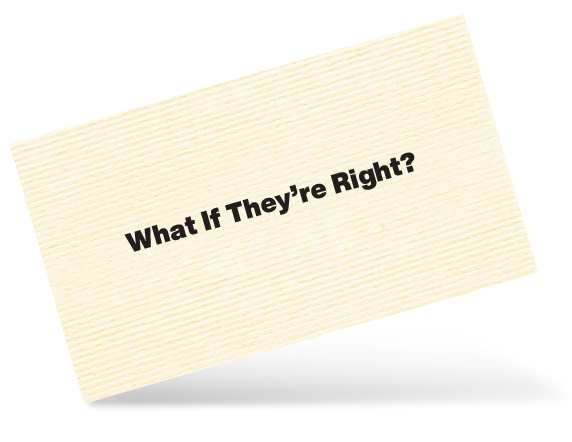 2) Don’t be cynical. There was a story about a creative who presented a full-page ad when the client had asked for a half-page. I heard that the client asked, “that’s a great idea. How would it look as a half-page?” The creative director picked up the ad, tore it in half, and said “like this”. That’s an entertaining story, but it didn’t make for the best of an agency/client partnership. I doubt the client saw the humor. If he really wanted to sell it, he should have prefaced it by giving them what they asked for, the half-pager, then present the full-page with some rationale for why he felt so strongly that it would be better for the client.

3) Show them you care. If you show them you really care, they will listen. That’s simple human nature. Learn everything you can about their business. Act like you’re a part of the team, cause you are. Get to know them, understand their needs, and go out of your way to solve them. If a problem arises, don’t ignore it or sweep it under the rug. Respect them by acknowledging the problem, apologizing for it, and fix it immediately. Then take steps to make sure it doesn’t happen again.

4) Keep Your Promises: Mean what you say. If you make a promise, make sure you deliver on it. If you can’t, bite the bullet and be honest. And never, ever, not ever lie.

This is nothing new. From Burma Shave signs to the Mad Men heydays to the current digital diversification, agencies have always had to evolve to remain relevant and cost-effective. What remains a constant is the power of creative ideas and innovative means of communicating easily understood and persuasive brand stories—two disciplines Broderick Advertising can deliver, no matter the medium.

I’m the world’s worst at picking my own stuff to show. But I did manage to pull together a few things. Most are just as they were published, but a few are like “director’s cuts”, with my own improvements. Some things are unpublished, shown just for fun. If you see something you like, drop me a line and let me know. Also, check out more current work at broderickadvertising.com or the social media links below. I am solely responsible for errors and/or omissions, but— I take zero responsibility for them, ’cause life’s too short to worry about such things.